It’s an opportunity for parents, grandparents, siblings, relatives and friends to honour and remember babies who have passed away due to miscarriage, ectopic pregnancy, still birth or postnatal causes.

When a child loses their parents, they’re called an orphan; when a wife loses her husband, she’s called a widow. But there’s no name for parents who have lost a baby. Often grieving parents suffer in silence because you are grieving the loss of a baby you never met or didn’t get the chance to hold and the pain of losing a child is impossible to describe.

So many around you don’t understand why it’s difficult to move on. One well-meaning friend at the funeral of an infant thought she was providing comfort by saying: ‘Don’t worry, you’ll have another one.’ She could never have understood just how deeply hurtful those words were to a grieving mother.

You can feel isolated and even shamed into silence because many around you don’t understand your grief.

One in every 3 pregnancies ends in loss. You are not alone.

On October 15, there any many ways you can honour your baby – releasing balloons, a remembrance walk, a memorial service or host a Taboo Tea:

“Break the silence on the ‘taboo’ subject, stir the pot and raise your voices to talk to family, friends, work colleagues about pregnancy and infant loss.

To help you hold your afternoon tea, ‘Yasminah’s Gift of Hope’ has put together an afternoon tea awareness pack including an assortment of tea, coffee, a cake mix, an awareness mug and a candle to light in honour of all the babies who left too soon. They also include a list of discussion topics and the facts about pregnancy and infant loss.”

Visit https://www.facebook.com/yasminahsgiftofhope to find out more. 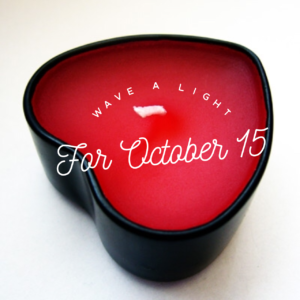 Wave a Light for October 15.

Everyone around the world is invited to light a candle at 7pm in ALL TIME ZONES and keep it burning for an hour. It will create a continuous wave of light over the entire world on October 15. http://www.october15th.com/